Our Senior Program Coordinator Robert Evans is in Haiti this week to help launch a new soccer camp which will form part of a visionary international project aimed at building a sustainable village for the people of Akayè.

Robert will keep us posted on his progress with a blog diary that he will keep during this historic week for our organization! Scroll down beneath his diary entries for more information about the project which is a collaboration between America SCORES, the State University of New York Center for International Development in Albany, New York, the W.K. Kellogg Foundation, Global Outreach And Love of Soccer, Fútbol Más, The Sanneh Foundation and Street Football World

Zach and I met with Rosemila Sainvil Petit-Frère, the mayor of Arcahaie on Saturday. She had personally requested the assistance of SUNY Albany in getting soccer organizations involved to run a soccer clinic for the village. This is the second year that the camp has been running but the first year that soccer has been added to it.

Ultimately, this is an experiment, one that we have to be flexible with because anything could happen. There are only so many things for which you can plan. Some of the things that we can plan for but have to be flexible with includes: the curriculum, the desire of the kids to actually want to play in the heat, the selection process for who we serve, giving out the limited equipment that our organizations brought to Haiti, and ultimately the language/cultural barriers.

We got together and drove up to Arcahaie, met the Mayor and one of our translators who rounded up 20 students for us to meet, checked out the pitch, played some icebreakers with the kids in the shade (too hot to play soccer in sun at the time), went to the beach, played beach soccer, went for a swim, ate seafood and then headed back at dark.

We are working with 10 Haitian coaches specifically chosen for their skills between GOALS Haiti, Fútbol Mas and The Sanneh Foundation. The soccer camp is one aspect of the entire summer camp. We are looking to engage between 200 - 500 students over the 5 days of the soccer portion of the summer camp. The day will be split up into two sessions with a break during the hottest part of the day, 11am - 3pm. For the entire camp, around 4,000 students will be engaged through different types of workshops focused on various social and community aspects. About 30-40 other educators and professionals will be leading the workshops at the regular summer camp site.

On Sunday we ran a full day of training with the coaches from around 10am to 7pm. This helped to not only get to know who we’d be working with but also identify the various strengths and experiences all the coaches have. One of the biggest differences is that the kids we serve in New York are primarily Hispanic/Spanish-speakers, with a small portion of them being Haitians, a majority of which are in our Brooklyn program that was started in 2016. After going through the coach training and identifying some of the community challenges that we’d like to address through soccer and dialogue, it appears that many of the challenges faced are similar to those in New York. I know that our Haitian coaches will do an excellent job building rapport with their students and promoting meaningful conversation.

After missing a day of camp to perceived escalating protests in the City center of Akayé, we had to slightly adjust our plans. We headed out there around 7:00 still not knowing exactly what to expect in terms of number and age of kids, additional resources available, and amount of time available to run sessions. After having breakfast, they are lead to the plaza for the anthem and flag raising ceremony. While they wait, there is music playing which they sing and dance to. This is how the students start the summer camp every day. 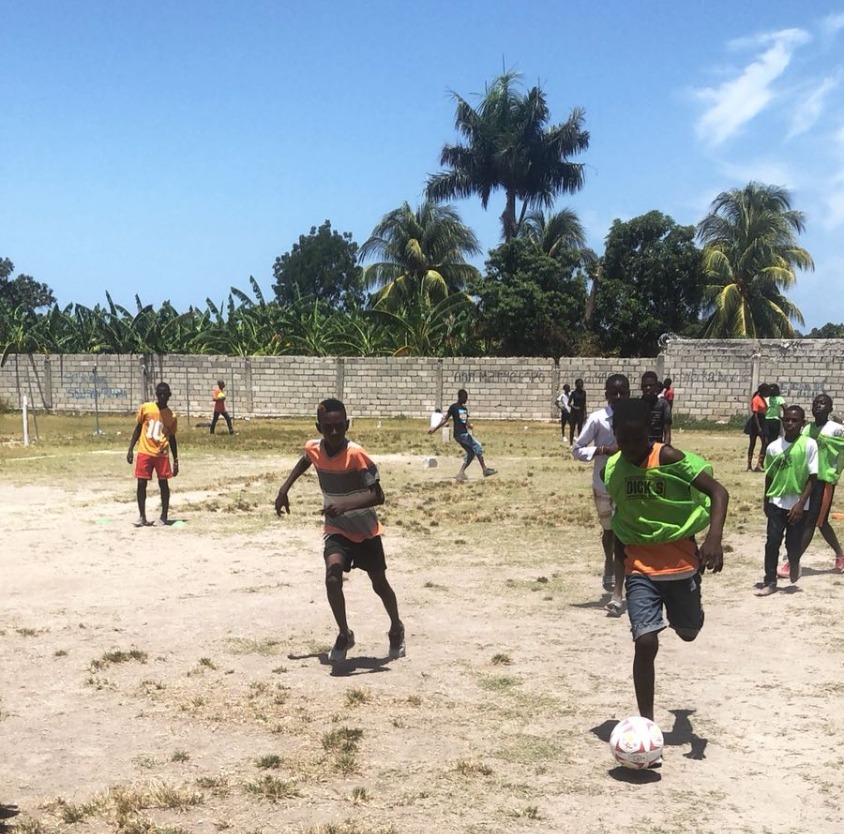 We quickly learned there were over 2,000 students and that the educational workshops and soccer camp were the only truly guided activities for the entire week. Remember, between educators and soccer coaches, there was about 40 of us so there clearly weren’t enough people to actually engage everyone. The ratio would be at least 50:1, which doesn’t include the translators for the non Creole speakers. It wasn’t until after camp had finished for the day when we learned that any student who wasn’t chosen for a workshop or soccer camp would just stay back in the plaza and playground with camp monitors. The 10 coaches ended up taking on around 400 students and each pop up workshop run by the SUNY professors had about 50 students each. Shortly after arriving around 8:30am we were greeted by one some of the mayor’s colleagues, who gave us a welcome speech and the kids started arriving around 10:30. We were able to run a session from 11:30 - 2pm. Some things we learned/weren’t expecting once the kids showed up and we received ours for the soccer camp: We got many more kids than expected (around 400 vs 100 for a ~30:1 student to coach ratio with 10 coaches)

The ages extended outside of what we were planning for (7-18 vs 8-15) Many kids, more often girls, came in either nicer clothes, school clothes, or dresses (athletic wear, such as shorts and soccer specific wear like shoes, are very hard to come by in Haiti). In terms of materials, we ultimately had just what we brought between the SUNY liaisons and SCORES: 15-20 inflated soccer balls + another 30, 30-50 cones, maybe 70 pinnies. We were only going to be able 1 session a day in the morning of 2-3 hrs instead of 2 splits sessions

The initial idea to create a community center has grown into a dual-purpose plan for a sustainable village that promotes the health, education and economic well-being of the people of Akayè, utilizing the State University of New York’s Center for International Development, which has drawn university students from across SUNY’s 64 campuses into this new learning space. Alongside SUNY, ASNY is proud to partner with the W.K. Kellogg Foundation, Global Outreach And Love of Soccer, The Sanneh Foundation and Street Football World to participate in this amazing opportunity.

How did you come to be the Senior Program Coordinator at America SCORES New York?

I have been working in sports and with youth in some capacity since I was a teenager reffing soccer games at tournaments. My work in youth development really started back in the summer of 2013 when I was working for a French NGO called “Les Enfants de la Goutte d’Or” around Montmartre in Paris, France. After our Peace Corps trip was cancelled over two years ago, I still wanted to be involved in something that tied community development with youth development and when I found out America SCORES did that using a combination of soccer, community service projects, and creative expression, I had to be a part of it. It’s a job that’s never been boring and always kept me on my toes!

What is America SCORES doing in Haiti?

As an organization that employs sports based youth development strategies in its curriculum and everyday practice, we have been asked to help launch a segment of a larger, long-term community development project sponsored by the W.K. Kellogg Foundation through SUNY’s Center for International Development in Haiti. The component we are focused on is the summer soccer camp for youth. Sports based youth development on the soccer pitch is about being intentional with coaching your youth so that they not only have a wonderful experience playing the sport but are also engaged in ways that develop them as future community advocates and successful leaders. By promoting sportsmanship, self-expression, commitment and teamwork for youth and putting in the necessary resources, they learn to develop the skills necessary for success off the field and outside the classroom.

What other organizations are involved?

W.K. Kellogg Foundation - The W.K. Kellogg Foundation supports children, families and communities as they strengthen and create conditions that propel vulnerable children to achieve success as individuals and as contributors to the larger community and society. In the aftermath of the 2010 earthquake, a new window of opportunity opened in Haiti, thanks to strengthened solidarity among Haitians, renewed international interest and longer-term strategic thinking. Kellogg’s current efforts focus on two micro-regions: the Central Area and the Southwest Corridor. State University of New York Center for International Development (SUNY/CID) - The State University of New York's Center for International Development is a leading university based international development center enhancing knowledge and practice of governance and policy making world wide dedicated to assisting governments and private organizations improve their decision making and services by providing outstanding technical assistance and research. Global Outreach And Love of Soccer (GOALS) - Established in 2010 in Destra, spread around near Leogane, focus on community collaboration. We’ll be working with several of their coaches Their mission is to advance youth leadership through soccer and education to create stronger, healthier communities in rural Haiti. Use Leadership development and social change initiatives in communities of rural Haiti. They provide food, water, mentoring, weekly volunteer community service projects, literacy classes for families, school financial support, community meetings. The Sanneh Foundation - Their mission is to empower youth by supporting and promoting educational attainment through in-school and after-school support, improve lives by providing programs that strengthen physical health and social and emotional development, and unite communities by advancing diversity, equity, and community well-being. Street Football World - the leading global network of soccer-oriented community organizations and nonprofits that rally behind a common goal of using football as a tool to drive social change. They see football as a great uniting force – a universal language we speak and a common culture we share. Whether at the final of the World Cup or on the streets of a rural town, football has the power to bring people together and instil in them a sense of community and companionship.

Fútbol Más - Fútbol Más started in 2008 with the aim of promoting resilience and happiness in children and adolescents living in contexts of social vulnerability. They work with two main actors: children and their communities. They provide social-sport workshops and training programs for youth, families, and educators. In 2013, Fútbol Más was implemented in the school of Bas Canaan in Haiti and due to the earthquake in 2010, more than 200,000 are living in this area, which has become one of the largest human settlements on the continent today. After two years of intervention, the program was formalized thanks to support of Fondo Chile, an initiative of the Government of Chile and is now carried out by Haitian-Chilean professionals.

Where is the camp going to be?

The camp will be in Arcahaie (Akaye) (Haitian Creole: Lakayè), which is a commune in the Arcahaie Arrondissement, in the Ouest department of Haiti. It is just northwest of the capital, Port-au-Prince. Check out this link for more info.

What do you hope to get out of your experience?

At the very least I’ll get the opportunity to work with and learn from other coaches and professionals, which is always exciting for me! Hopefully this will be a good experience for everyone involved so that America SCORES can continue to send professionals to help start and develop more international programs.

Here's Why I Chose AmeriCorps and ASNY

Hope in the Time of COVID: Healing through After-School Programming

A Year in Poetry

Have you been paying attention to the top of our newsletters? To bring the spirit of poetry into each one, we've pulled a couplet from Sara Coleridge's poem The Garden Year to reflect on what the mont